The notes on my phone are an absolute disaster. It ranges from the names of people I’ve met at my weekly dinner with my grandma to nonsense about a dream or a thought I had. This is one I forgot about completely before today:

(Even in my notes, I misspell everything.)

I bring this up because today, North Dakota was brought up as a place where the NHL could wrap up some of the season’s games, according to Sportsnet. It was a fleeting idea, just spitballed but it reminded me of this note.

An NHL hockey team much like the Carolina Hurricanes. There are two Carolinas but the name is just “Carolina”, so instead of North or South, it’s just Dakota *Insert Mascot Here*.

But here is the kicker: The stadium is sat in the middle of the state lines. 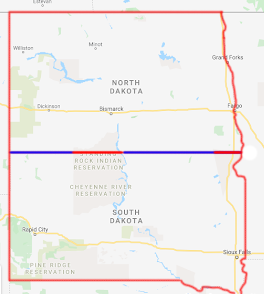 Now the blue parts of the line are where the stadium could sit. The red is on different reserves so that won’t work. The area isn’t extremely mountainous so finding flat land to build on wouldn’t be difficult.

There is a town called Lemmon, just west of the Standing Rock Indian Reservation, that would be a good place to build. The town is right on the border and is an established yet charming town. In 2010, the population was 1,227 people so it’s a great place to build and help prosper.

As for a team name, I like the Dakota Muskrats or Dakota Badlands, both are unique to the Dakotas. I’m leaning towards Badlands, Muskrats aren’t that scary.

This is theoretical and I’ve done 30 minutes of research into it but Gary Bettman if you need someone to help provide some expansion ideas hmu, I’m currently jobless with a lot of time and ideas.