It’s the most wonderful time of the year! The official start to the hockey season. Today, September 15th, the Blackhawks kicked off the end of training camp and the beginning of the preseason with a scrimmage game against one another.

Of course, Ham Sports was there to represent. Here’s a look back on this 2019 Blackhawks Training Camp Festival.

Waking up at 6:25 usually sucks, but not when you have hockey to see! It was a cloudy, stormy day in Chicago. The Festival is usually held outside but because of constant rain and lightning, the free games and tables were moved inside the Atrium of the United Center.

For the most part, we skipped out on that and headed inside the main part of the United Center. The first 10,000 fans got to take home a Patrick Kane bobblehead and we were luckily one of those first 10,000. The actual figure is of Kane’s goal celebration from 2010, the leaping down the ice after he scored in the 2010 Stanley Cup Final in OT Game 6. This, of course, won the Blackhawks Cup #1 and began the Dynasty. I didn’t expect to get the bobblehead so I’m really happy to have gotten one. 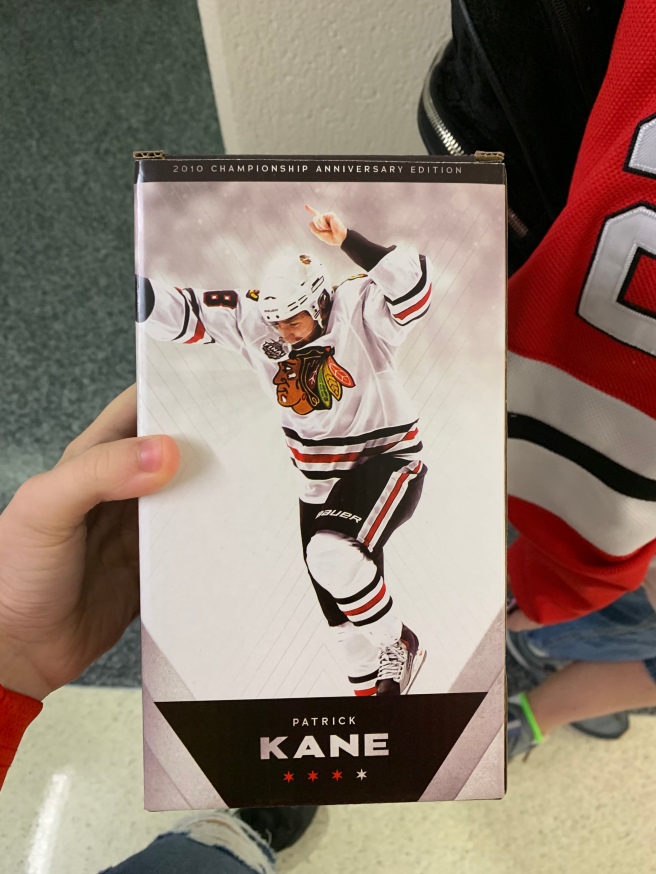 I wore a Blackhawks home sweater to the game today. There was no nameplate or number because I wanted to get it customized with Dylan Strome’s #17. I decided, for some dumb reason, to go do this BEFORE finding seats (which are first-come, first-choice on where you can sit). So anyway, they told me “Okay, it’ll be $50 to get the name and number.” I was like sweet, they sent me to the “Returns and Exchanges” line, where half the bastards in line were just buying things. Finally, I get up to the guy and he types it in and is like “okay, that’s $98” and I know rax in Chicago is high but what the fuck?

I asked “is that all in tax?” and he said yes so I decided to just do it because it’s better than buying a $200 one online. I bought it and they said that the jersey will be done in 30 minutes. At that point, I was annoyed and wanted to get decent seats so I just left and went to find seats.

We looked on level 100 and 200 of the UC but all of those seats were filled. We went up to the rafters and sat in the 300s but in the United Center, there is not a bad seat in the house. 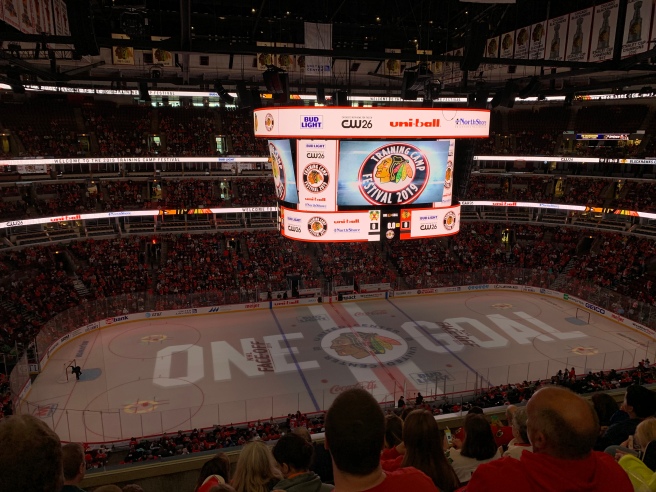 One thing I love about Blackhawks home games is the energy in the building. Even though this was a scrimmage, the air was still electric. The new scoreboard was playing hype videos and little montages, it’s one of my favorite things about games.

As we were sitting there, I looked at my receipt for the jersey and realized, the kid at checkout charged to for buying a jersey even though I wore mine in. That’s why the total was almost double, it wasn’t the tax. When I realized that, it had been an hour since I bought the bettering and we had 30 minutes to puck drop so I headed back down to the store to get a refund. Thank God the cashier working was super nice and got me my money back. Turns out the lady that was behind us in line was also overcharged for something.

It’s nice not to be alone.

The jersey was also not done so we trudged back up to Level 300 and I was able to get into the seats just in time for the Lights Out.

Basically, there will be a badass countdown on the board and when it hits 0, all of the lights go out in the arena. Then they begin a montage that has some of the franchises best moments; Makita, Esposito, Hull. It’s such a motivating video that just reminds me why I love this team so damn much.

(I should add that about 10 seconds after Lights Out, I got a call that my jersey was done 🙂 )

There really is nothing like the Star-Spangled Banner in the United Center for a Blackhawks game. I will fight anyone and everyone on that. It is the loudest building in the world when Jim Cornelison gets on that mic.

The building was bumping after that was bumping because after a long, long summer. Hockey is finally back in Chicago.

There were the usuals, Patrick Kane, Jonathan Toews, Duncan Keith, Corey Crawford, Brent Seabrook, and who can forget Andrew Shaw! The Mutt is back in Chicago and you knew he was being a pest even against his buddies. Not to mention Kris Versteeg, who got the lone goal for the White Team today.

There were also quite a bit of new faces out there such as Olli Maatta, Zach Smith, and Robin Lehner are just to name a few. Maatta had a great showing today. He had a goal and assist for the Red Team. Lehner was on fire in net and allowed 0 goals when he played in the 1st period.

Alexander Nylander was finding his footing well with the team and was buzzing around nicely. There were two other players who stood out to me: Philip Holm (Defenseman) and Nathan Noel (Forward).

Holm was all over the puck, he had great shots but was getting into the gritty areas and battling hard. Noel has got some wheels on him, the kid was flying around the ice.

Of course, it’s always good to see the young guys battle in these games, to see who we may have as back up this season.

The game’s regulation ended 3-1 in favor of the Red Team. The game continues into a 3v3 Overtime, no matter the score and eventually a shootout. In OT, the Red Team, picked up 2 more goals, one from Olli Maatta in the first 25 seconds. In the end, the Red Team had 5 goals from Anton Wedin (another good young guy), Brandon Saad, Alexander Nylander, Tyler Sikura, and Olli Maatta. The White Team had 1 lone goal from Versteeg.

In the shootout, Versteeg whiffed his shot completely. Matthew Highmore and Dylan Sikura also missed their shots so the White Team ended the game with just 1 goal, The Red Team made 2 shots from Dominik Kubalik and Amad Boqvist. Dylan Strome also shot but missed.

Overall, it was a great game back to the UC.

I got the jersey at the 1st intermission and kept it on all game. So I call it a win. Plus I got a nice Cubs/Hawks pin so double win. 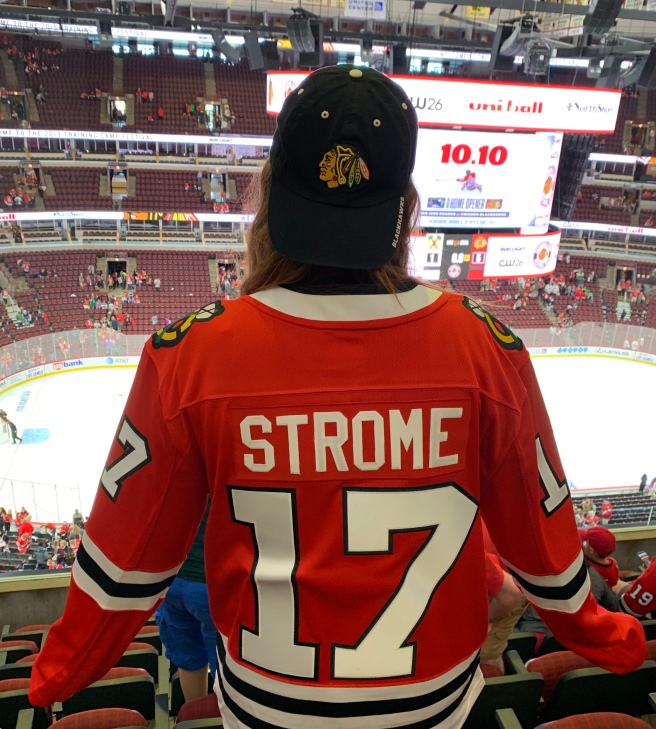 The Hawks still had some hiccups in the game when it came to fluidity and accuracy but overall, the team looks good for the start of the season. Their first preseason game against the Capitals is tomorrow so that will be a real test. But in the end, this team feels alive again.

It feels good to be back.